EMPORIA, Va., Dec. 5, 2022 /PRNewswire/ -- Today, the Greensville Circuit Court Released a Ruling in open Court overruling the Virginia Attorney General's Demurrer and denying its Plea In Bar to Hermie Sadler's Amended Complaint, and extended Sadler's previously ordered injunction enjoining enforcement of the "skill game ban" in the Commonwealth of Virginia under both the Virginia General Assembly's previous attempt to do so in Senate Bill 971, and the change of the criminal gambling statutes through language inserted in the Commonwealth's biennium budget passed by the legislature in July.

Bill Stanley and the law firm of The Stanley Law Group, PLLC, had previously filed in the Circuit Court for the County of Greensville a two-count Complaint for Declaratory and Injunctive relief on behalf of his client, former NASCAR driver and Virginia small business owner Hermie Sadler, against the Commonwealth of Virginia, then Virginia Governor Ralph Northam, Attorney General Mark Herring and the Virginia Alcoholic Beverage Control (ABC), alleging that banning the operation of skill games in the state violates small businesses such as Sadler's constitutional rights to free speech, as well as being in violation of their right to procedural and substantive due process under the Constitution of Virginia. A year ago, in a Court ruling handed on December 6, 2021, the Court granted Stanley's Petition for a Preliminary Injunction against the enforcement of SB 971, thereby keeping the skill games operating while the matter was pending before the Court. Subsequent to that ruling, budget writers in the Virginia General Assembly inserted new language in the 2022 Commonwealth's budget at the last minute in an attempt to circumvent the Court's 2021 Order and re-write the state's criminal code to ban skill games from operating in the Commonwealth of Virginia.

Sadler's legal team then amended their first Complaint and Petition for an Injunction to include this new budget language for the Court's review. Sadler argued that the insertion of the new language into the budget violated the Constitution of Virginia's "single object rule," and that this new budget language, although different from SB 971, still violated Sadler's constitutional protections of free speech with these skill games.

After a hearing on the matter where the Virginia Attorney General's office once again challenged the sufficiency of Sadler's new Amended Complaint, the Circuit Court, Judge L. Lerner presiding, found that as to the single object rule, the Court declined at this time "to peek behind the curtain," although the Court also noted that legislating through the budget has now become an unfortunate habit for the General Assembly. Regarding Sadler's renewed free speech argument, the Court noted that it has been very consistent since the Sadler v. Virginia case began in 2021 that video skill games are protected free speech expression. The Court opined that it didn't matter if there is a profit motive in the free speech expression, and that it also does not matter if players win prizes for playing the skill game. The Court quoted, in agreement with Sadler's legal brief (and as articulated by the Sadler legal team's First Amendment expert lawyer, President of the Vermont Law and Graduate School Rodney Smolla), that "the Free Speech clause controls the Commonwealth, the Commonwealth does not control the Free Speech clause." The Court concluded that Sadler had met his legal burden once again on the conditions necessary to grant injunctive relief, and then Ordered that the injunction currently in place shall be continued in full force and effect, including the enjoining the enforcement of the new "skill game ban" budget language. The Court further ordered that a final trial on the merits be held in the spring of 2023.

Bill Stanley, lead counsel for Hermie Sadler, made the following statement: "Hermie and I started this journey to fight for small business against government overreach over a year ago. They said we had no chance of winning back then, and last year we proved them wrong. And this year, when casino interests and certain members of the Virginia General Assembly tried to circumvent our victory preserving skill games in Virginia by inserting "skill game ban" language in the state budget, we challenged them once again; and today, we have won once again. This decisive victory is yet another step in this journey as we strive to create a level playing field in Virginia's new emerging gaming industry to include participation of Virginia small businesses and prevent out-of-state casino interests from having an unfair advantage and monopoly. I am so proud to stand with my friend Hermie Sadler in this fight, and we look forward to final victory at the trial to be held next spring."

Plaintiff Hermie Sadler, made the following statement: "What a big day for small business in the Commonwealth of Virginia. But this is about so much more than skill games. This is about government overreach, protecting the free market system for small business owners, and not allowing out of state special interests to dictate how our state government and small businesses operate. I am so very thankful for today's ruling for many reasons, but the main one is that it gives us the chance to prove our case once again in court next spring. And, I am thankful for my great legal team, and extremely happy for small business owners and their families who can rest easy knowing that they can operate their businesses through the holidays without further interference from the government and out of state casino interests."

Jason Hicks, partner at Womble Bond Dickinson law firm and co-counsel with Bill Stanley on the Sadler case, made the following statement: "We are pleased with the Court's ruling and want to thank Judge Lerner for the many hours he has spent working on this case. We continue to believe that the budget amendment violated the single object provision of Virginia's constitution. But we're glad that the Court recognized the skill game ban, as originally enacted, and as amended, violates the free speech clause. We are looking forward to having a final trial in the spring."

END_OF_DOCUMENT_TOKEN_TO_BE_REPLACED

EMPORIA – In the evenings, after truck drivers park their cargo trailers for the night, dozens of them gather at Sadler’s Travel Plaza in Emporia, a truck stop with an old-school road-trip vibe right off of Interstate 95 that offers not just gas and food but amenities like showers, a laundromat and several forms of entertainment. The truck stop’s eight electronic betting machines are especially popular among truckers and locals seeking to kill some time. “You come to this place in the evening time and it’s hard to find a game to play,” said operations manager Michael Allen. “Folks are definitely enjoying it.”

END_OF_DOCUMENT_TOKEN_TO_BE_REPLACED 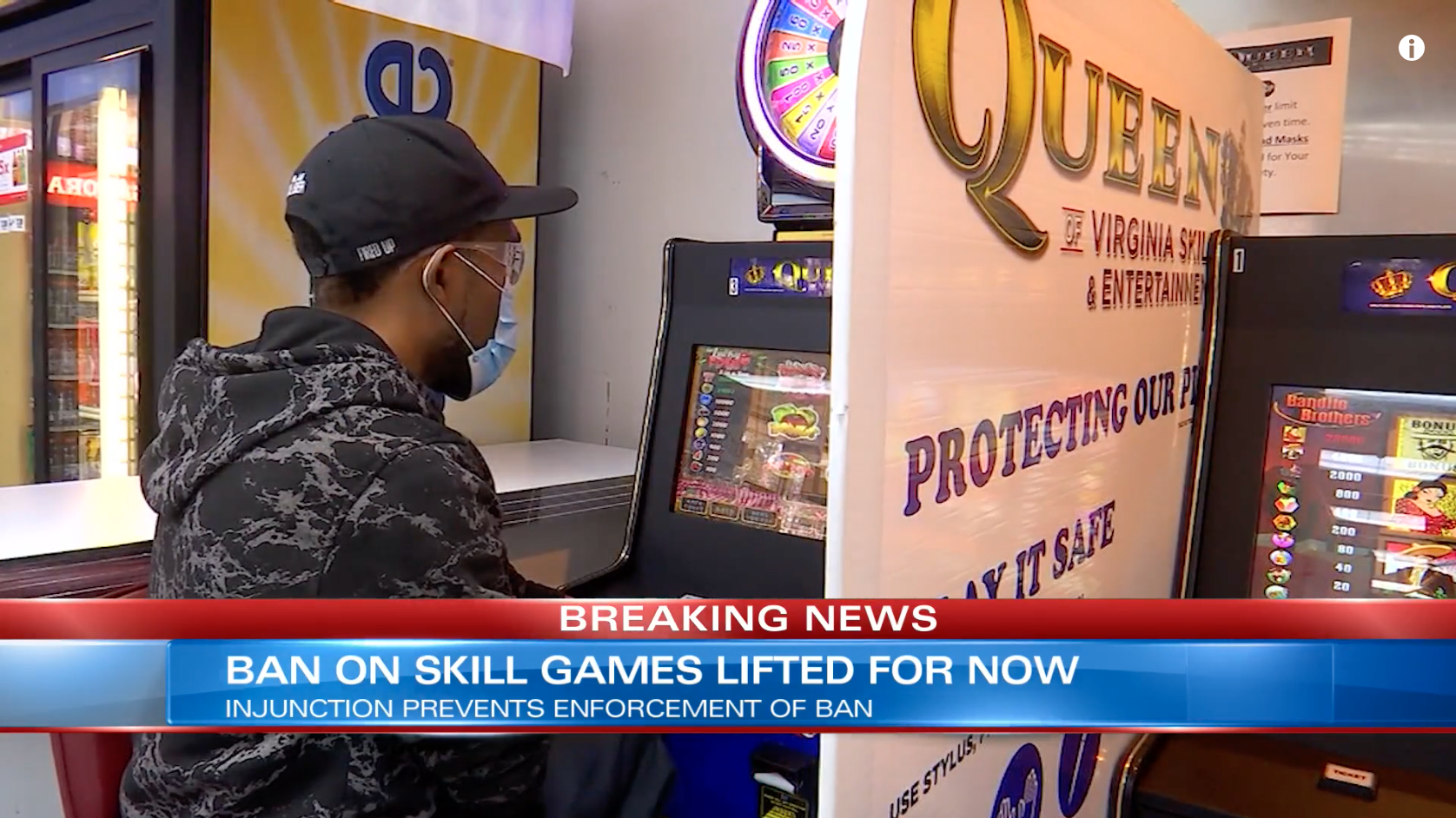 RICHMOND, Va. (AP/WAVY) — A Virginia judge has issued a temporary injunction blocking the enforcement of a law that banned electronic betting machines that had proliferated in gas stations, bars and other locations around the state.