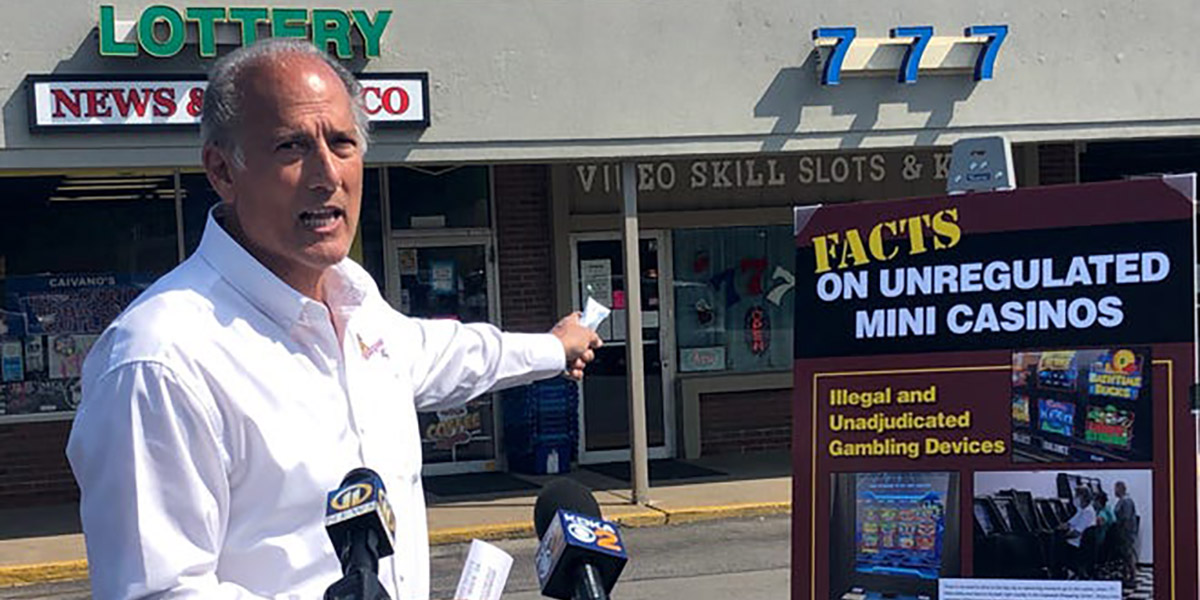 The makers of Pennsylvania Skill games are asking police to shut down “illegal mini-casinos” in the state, including one in Beaver County, rather than singling out Pace-O-Matic’s “presumably legal” gaming machines. Local law enforcement say illegal gambling operations are rare in the county.

Pennsylvania Skill leadership urged police to crack down on illegal gambling at a Beaver County news conference Tuesday, but local authorities say unlawful gaming operations are “rare” in the county.

“We know it’s illegal because we’ve been inside,” Marino said.”These are slot machines, and slot machines can only be legally operated in casinos sanctioned and licensed by the state. There are hundreds of these illegal machines throughout the region, and thousands in Pennsylvania.”

Lozier, though, said he was given just a few hours notice of the conference. He believes the event was a publicity stunt and not a sincere request for a criminal investigation, noting the Hopewell business is a potential Pennsylvania Skill competitor. State police and the Pennsylvania Gaming Control Board were not aware of the conference, either, according to Lozier.

Operators of 777 did not immediately respond to request for comment, but Lozier said determining if a gaming machine is legal can be nuanced and determined by case law.

“It’s not an easy question,” Lozier said. “I need more than a few hours' notice to investigate a crime. Rather than notifying the investigative agencies, this corporation scheduled a press conference. If they wanted me, or state police, to investigate the crime, they would tell us in advance so we could go in."

Still, Lozier said he is working with investigating agencies to determine whether a crime has been committed at the business. It’s rare his office hears complaints of illegal gambling, he said. The last big Beaver County raid involving illegal gaming was 2018.

What separates Pennsylvania Skill games from traditional gambling, according to the company, is the mental progression players must follow before payout.

“If you have the patience and the skill, you can win on our machines many times,” said Rick Goodling, compliance supervisor for Pace-O-Matic. “On the illegal games, the game already dictates whether you’re going to win or lose before you even press that button.”

State police have periodically seized Pennsylvania Skill games from taverns, veterans clubs and other businesses as legal ambiguity remains until legislative action is taken. It’s unclear how many traditional slot machines are in use illegally statewide.

Pennsylvania Skill leadership is frustrated police are singling out presumably legal gaming at places like fraternal clubs rather than unlicensed “mini-casinos.”

“We pay our taxes, millions of dollars in taxes,” said Marino, adding that the solution is to set aside revenue for more police officers and investigating bodies to monitor illegal operations. “I love enforcement. I'm a law enforcement guy... but here’s what law enforcement needs to concentrate on.”

Businesses hosting Pennsylvania Skill games report receiving substantial revenue from the machines, although the Pennsylvania Lottery and state’s casino industry considers the games to be an unfair competitor that uses loopholes to avoid gambling taxes. The difference between traditional slot machines and skill games is sometimes just one tap of the screen, they argue.

Company leadership says their games have produced hundreds of jobs, tens of millions of dollars in tax revenue and continue to support small businesses during the COVID pandemic.

This story was originally published by The Beaver County Times on September 23, 2020.