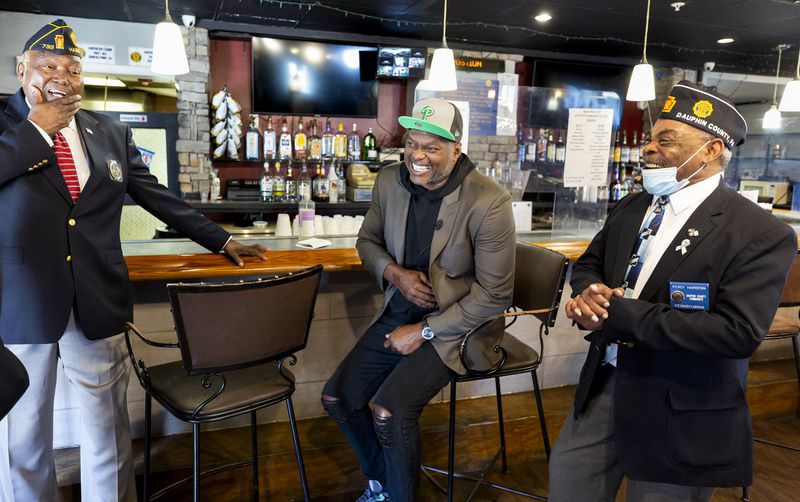 HARRISBURG — LaVar Arrington came to Harrisburg Tuesday to talk about how important legal skill games are to military veterans.

The former Penn State and NFL linebacker met with members of the Ephraim Slaughter American Legion Post 733 and advocated for skill games. Additionally, he insisted for them to not be boycotted because of how impactful they are for veterans in the community financially.

Such skills games, found in clubs, bars and some stores, are the focus of controversy. Pennsylvania State Police, commercial casino operators and Pennsylvania Lottery officials have challenged their legality, arguing they are gaming devices operating outside of state-licensed casinos, and avoiding both consumer protection regulations and state taxes.

Arrington also gifted the Legion— which was named after Harrisburg’s last surviving Black soldier that fought in the Civil War— with a $5,000 donation on behalf of the Pennsylvania Skill organization, powered by Pace-O-Matic.

And Paul Goldean, Pace-O-Matic’s president and chief operating officer, presented the Legion’s Post Commander Stephen Holmes with a tomahawk axe as a token of the organization’s appreciation.

“I didn’t serve our country”, Arrington said, “but I understand the importance of our men and women of service.”

“Being able to come to a branch that is a historically Black branch and being at the 733rd in Harrisburg gave me a chance to see what I grew up around again.”

It was a nostalgic moment for Arrington — whose father is a Vietnam War veteran — because he said was surrounded by veterans in his youth and they were the ones who coached him up and held him accountable.

“It’s that communal aspect that’s so important and a lot of times it’s embraced by veterans”, he said. “Those were the dudes who were coming to grab you up if you got in trouble.”

Arrington said his father— who lost both of his legs during his service— was a big part of the reason as to why he is so adamant about servicing veterans.

“He’s got two prosthetic limbs because he lost both of his legs in Vietnam. He’s always proud of the constant support that I give to the men and women of service. There just needs to be strong men in our lives and we need the presence of strong men in and around our communities.”

Arrington was the second overall pick in the 2000 NFL Draft and spent seven seasons in the National Football League. He was also a 2022 College Football Hall of Fame nominee.