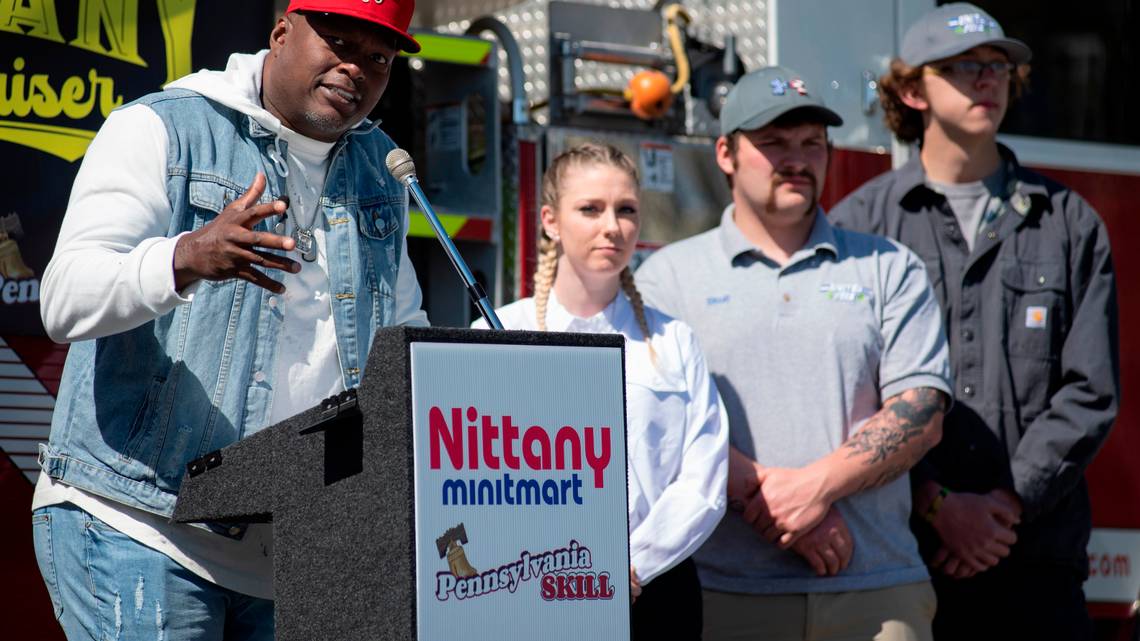 The event was held at Nittany MinitMart’s State College headquarters for its third annual firefighter fundraiser, which runs through May. Arrington, who played for Penn State from 1997-1999, returned to the area he feels has molded him.

“I’ve always been someone who supports being a common person and being someone that helps the common man and helps the small businesses,” Arrington said. “It’s pretty important to me. It’s been something I’ve been really, really committed to and super passionate and excited about doing.”

Nittany MinitMart, which has stores in 11 counties, donated close to $56,000 to fire companies last year and set a goal of $100,000 this year during the two-month promotion. Arrington looks to parlay his upcoming induction to the College Football Hall of Fame, along with the Blue-White game on Saturday, to bring attention to the challenges plaguing volunteer firefighters.

“I’m going in (College Football Hall of Fame) in December,” Arrington said. “(It’s) very humbling. I’m super, super excited to be a part of that. In moments where I have personal triumphs and accomplishments, if I didn’t have the community behind me, if I didn’t have that energy and the feeling of the fans and the people who were a part of all of those experiences that led to me getting inducted into the hall of fame, I don’t how much of an experience it would have been. I’m excited to leverage that accomplishment while I have some attention on me to help others along the way.”

Shawn Kauffman, president of Alpha Fire Company, is a second generation firefighter and has had 35 years of service within the community as a firefighter. He’s excited to partner with Nittany MinitMart and Pennsylvania Skills to continue his father’s legacy.

“My late father worked for Nittany Oil for 21 years,” Kauffman said. “I worked for Nittany Oil for a short period of time during high school and college. So, this is an extra special event for me. We’re here today to talk about what these donations mean to the fire companies and it’s important to understand that it’s critical for the operations of many of our fire companies. It’s getting more and more expensive to operate a fire department on a day-to-day basis.”

Pennsylvania House Majority Leader Kerry Benninghoff, R-Bellefonte, formerly served as the Centre County coroner and touted the importance of the volunteer firefighters to the community in his previous role. He remembered firefighters standing outside in the rain and snow, with ice hanging off of their faces.